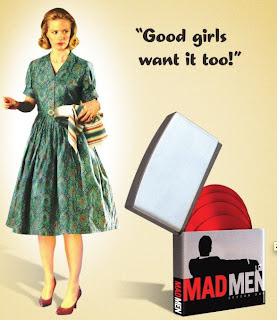 Mad Men's first season has just been released on DVD and the show returns to AMC for a second season July 27th. I have a longest-blog-post-ever appreciation in the works, which I have been writing sporadically since last summer. In the meantime, links:

-Michael Beirut at Design Observer gushes, esp over the show's representation of pitching at clients.

-Basket of Kisses, an unofficial Mad Men blog, delightfully obsesses, and pretty smartly. Their celphone photos of the NYC subway car promotional campaign are nice, which is to say I stared at them for a whole afternoon.

-Ad Age has a special 16-page Mad Men section, a 1960 pastiche featuring Sterling Cooper, which is reproduced online (the image above came from it, via Pop Candy).

-This video of Don Draper pitching Kodak's new slide projector, the Carousel, seems to be a favorite clip of the show online:

-But I think this devastatingly satiric, expository Joan-and-Peggy scene from the first episode sells the show even better: