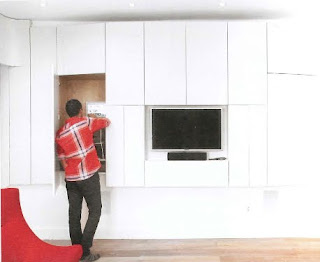 Next weekend I will be at the Media in Transition 7 conference at MIT, where I am giving a paper called "The Television Image and the Image of the Television" (pdf) about flat-panel HDTV sets. This work is part of the book I have been writing with Elana Levine, Legitimating Television: Media Convergence and Cultural Status, which we are told will be published in September (though the copyright will be 2012). The full paper has been posted as a pdf at the conference website. If you come hear me present at the conference, you will get to see lots of pretty pictures of HD television sets, like the one above from the March 2011 issue of Dwell. My paper identifies the switch from 4:3 CRT sets to 16:9 flat-panels as one facet of the wider cultural legitimation of television during the era of media convergence. It addresses the upscale and masculinized sophistication of the new sets, and their significance for TV's convergence with cinema and gaming.
at 5/06/2011 No comments: