The International Journal of Communication has just published a new section of essays on academic labor edited by Jonathan Sterne, and I'm really excited to have my work included in it. The essay is one I co-wrote with a friend I made at a Zionist summer camp in Canada in 1987, Ira Wagman. It's called "PowerPoint and Labor in the Mediated Classroom" (pdf). It draws on various sources, including my experience teaching a large lecture course (Intro to Media Studies) for many semesters and feeling like the PowerPoint component was taking up too much of my time and energy, even as I was always unsure I was using the slideware well enough. We tried to write our essay as both an assessment of PowerPoint, its functions and its value, and a set of practical suggestions not so much for how to use the software, but how to think about using it.
at 10/26/2011 No comments:

It is possible to do something special with a Gchat status, though the number of authors doing it thus far might be in the low double digits. The Gchat status, like much of what we do online these days, is a form of verbal communication, and the status is an art of language like poetry or rhetoric. Tweets and blog posts and Amazon reviews and comments on a Facebook photo can likewise be places for good writing, but I have chosen the Gchat status for this appreciation because it strikes me as a functionally unique instance in this particular moment, and because I happen to have been noticing Gchat statuses that I really like lately.

Gchat, the IM service of Gmail, lives in the sidebar of your inbox, though you might not have noticed it. It’s the only IM experience I’ve ever had. While I’m probably on the young enough end of Gen X to have been introduced to AOL and ICQ and other formative experiences of my Millennial friends and family, I was strictly an email person before my Gchatting began. At first I only ever Gchatted with one or two people -- my younger sister whose IM chops were developed in her teen years and an old friend living in another country where phone calls would be more expensive than IMs. Over time I have kept up with eight or ten friends and students (and students who became friends) with regular Gchats, and in my immediate family (mother, sister, wife) we use it as much or more than the phone. There are also contacts in my chat window with whom I have never or very seldom chatted, but whose statuses I regularly see and enjoy.

Gmail’s chat sidebar offers a narrow space for a status, which like a tweet or Facebook posting can take a variety of forms: a word, a phrase, a question, a quotation (with or without quotes), the title of what you’re reading (or writing), a report, an observation, an exclamation, a curse or blessing, a call to action, a cryptic reference, a fragmentary image, or a link to your new blog post or to a video you think is cute of pets or babies. On Wisconsin! Office job. This is what I do. Now 20% smarter! When is 112:30? Just chillin’. Snowdrift. feministmusicgeek.com. And you are? It is definitely too soon to be writing Interim Reports. Home. Asleep (how did I type that while I was asleep??!?).
I’m going to eat my feelings for dinner. Most of my contacts either have no status or have one that they update very infrequently -- effectively never. Some write a new one every few days or even more often.

The characters in a Gchat status are limited to around 500, but anything longer than around 20 characters (it depends on how wide your letters are -- you’ll run out of room for big A’s faster than little l’s) is truncated at that point and finished off with ellipses. When you mouseover the name in your chat list, a window appears with the contact’s picture, the full status, their gmail address, and a few buttons offering options to chat, email, and change settings. Thus approximately 20 is not exactly a character limit, but it is functionally important: most of the time people will only see that much. I’m more likely to mouseover a new status, or a status that hooks me in the first 20. I’m less likely to mouseover a link without description, because the likelihood of my following a link is always lower than of just reading a status. If you think 140 characters makes tweets into the most exemplary form of contemporary web brevity, Gchat statuses offer us even less room for expressing ourselves. But as in any form, constraints can be opportunities. 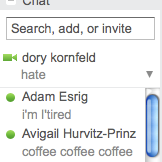 There are a number of things I find especially pleasurable about Gchat statuses. Unlike most of the things you can write nowadays on the internet, the Gchat status offers no direct feedback mechanism. You can’t like or favorite a status, you can’t share or retweet it, you can’t start a comments thread under it, you can’t give it thumbs up or down, digg it or bury it, or give it between one and five stars. You can’t mark it as spam or as inappropriate content, and you can’t recommend it to your friends with one click. Just try to share it on Facebook -- try it! I love how self-contained the Gchat status is, content to be its own thing and not a come-on inviting your participation.

On the other hand, there is one way of finding out more about a status or expressing your admiration for it: starting a Gchat. The absence of likes and retweets is actually an incentive to use Gchat for the central purpose of IM: person-to-person communication. Sometimes I have had others begin chats with me by asking more about my status, which works especially well with quotations of my one year-old son. (E.g., NO, Dada! got quick chat responses from his grandmother and aunt). One time a friend liked a link to a video and told me as much in a chat message. I have no real issue with the depersonalized nature of likes and faves and thumbsups, but I have noticed that sometimes they seem to offer a substitute for more interactive and substantive communication.

Another constraint of the Gchat is its total ephemerality. Unlike so much of our web lives, the status does not become part of an archive or timeline or profile. It doesn’t turn up in web searches, and doesn’t ever appear in roundups of tweets or comments. There is no way to link to a status, no way to easily save them for posterity. Aside from myself, I don’t know of anyone who collects them. I don’t believe the Library of Congress is on the case, and I don’t imagine we will ever see publication of the Gchat statuses of tomorrow’s great novelists or presidents, though you never know.

The beauty of a nice Gchat status is in part a function of it having appeared in a place you weren't expecting something so good. It is also a function of being an artifact of so little practical value, addressing an audience of perhaps a few dozen people, probably fewer, who are unlikely to respond in any way, and whose reception is untraceable. Unlike a blog, you can't keep track of user data. Unlike twitter there is no count of chat status followers. The status doesn't occupy a point in the web reputation ecology. It barely matters, isn't meant to last, and can hardly ever hope to make more than a gentle ripple in a great sea. It is approaching the purest mode of creativity, a gift. Sometimes I wonder if the chat statuses that I like are meant to please only the writer, and the public performance of this private expression is almost accidental. But of course these are appearances only. Communication ordinarily serves more than one function. A status is always, among other things, an expression of status. It just does a nice job of not always seeming so.

images by me and dorywithserifs (used under a Creative Commons license)
at 10/26/2011 4 comments: