As usual, television has been filling my late evenings. This fall so far has been remarkable for offering so many genres of programming to compete for my attention. Our household rarely tunes into the cable news channels, and I long ago stopped being a serious sports fan, but the incredible election campaign and our baseball team dramatically making the playoffs have renewed my interest in channel surfing. The debut of so many new shows (Dr. T watches each one at least once) has put our TV-on-DVD binging on hold completely and filled our DVR with unfamiliar titles. So here are some notes (in alphabetical order) on what's been flickering from our screen.

(For my thoughts from this time last year, see this post called "Most Will Fail".)

B is for Baseball in HD, a pleasure no matter who's playing. Ditto watching with a four year-old, which gives me the opportunity to try to explain the rules of the game in the clearest possible way. We've been working on the difference between a fair and foul ball for several months. Fastballs vs. breaking balls will have to wait till next year. The thing that interests Leo most is usually the names of the teams. He's good enough with lettes to be able to read "RAYS" and he certainly recognizes the Milwaukee Brewers.

and Brothers and Sisters, which has the best wasted cast you can imagine, so many of them more vivid and memorable in earlier roles. 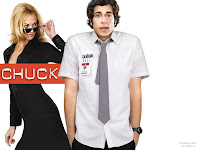 C is for Chuck, which didn't impress me much its first go-round. I assigned its second-season reboot as an example of an hour-long TV show in my intro to media course. Chuck seems emblematic to me of the trend in network shows toward episodicity, which disappoints me more than the more significant general decline of the networks. It also seems too broad and comedic for an hour-long show, another trend I deplore. Two years ago when the networks overdosed on serials in the Lost mold they had obviously overdone it. Now the pendulum has swung back too far in the other direction. The whole wish fulfillment geek/hottie love match scenario, which afflicts American entertainment like a vile, hideous plague, has really got to stop. (I include here the otherwise charming Nick and Norah's Infinite Playlist.)

D is for Dancing With the Stars, which like most reality, can only be watched with a heavy thumb on the ffwd. Warren Sapp, a retired defensive end of enormous girth, is the delight of this season. And on results nights when the prepubescent kids dance, you can't skip that.

and Debates, good Lord, which I would gladly watch in their entirety even if they were nine hours long. I constantly hear Sarah Palin's lines in my head ("we're a team of mavericks, what do you expect?") and picture McCain wandering in the background as Obama answers questions. But the real-time pundit scoring on CNN is distracting and irritating, and the postgame analysis is unbearable.

E is for Easy Money, a rare show about people who aren't filthy rich. Except, surprise! They are!

and The Ex List, My Name is Earl meets HIMYM meets Sex and the City, or something to that effect. Cutesy, forced humor. Appealing lead. Don't expect it to last.

F is for Friday Night Lights, which you can only see now if you have DirecTV (or if you know some other way of getting the new shows, wink), and which has returned to the camera and storytelling styles of its bravura first season. A pleasant surprise, but it's hard to forget the dumb crap they pulled last year.

and for Fringe, which at least held me through its first episode and almost ten minutes into its second. The show has characters, like the one played by Pacey from Dawson's Creek, that it doesn't know what to do with. It turns up the horror/suspense masterfully for a minute or two, then has scene after scene of clunky exposition and bogus conflict. It blew a huge wad on a fancy pilot but obviously won't sustain the style. The serial mythology is in the background and it's emphasizing episodic plotting. Yet another show with a bland young woman in the lead and a goofy complex sci-fi mysterybackstory to unfold little by little, which one senses the writers have figured out almost not at all. IMHO, J.J. Abrams peaked with Felicity. 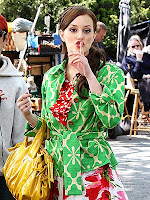 G is for Gossip Girl, which has at least one or two fantastically campy moments per episode, usually featuring Leighton Meester. Way overrated, usually by New Yorkers, but not without its charms.

H is for The Hills, which is running out of story to tell, and is sadly no longer the gem it once was. The Spencer-Heidi part of the show is bankrupt and the Audrina story would be good if only Audrina were the least bit engaging. They're spinning off a new show for Whitney, which doesn't sound promising since Whitney has never been much more than a person to listen to Lauren recap the events of her life.

K is for Kath & Kim, which could be a success if not a hit. The style, the cast, and the tone are all really good. The writing will need to find a formula to make the characters lovable. Molly Shannon was born to be a TV star, and Selma Blair does a good job of selling a stupid character without making her too grating. Love the scenes shot at the Burbank Mall.

L is for Life on Mars, a high prestige effort with big stars (Harvey Keitel!) and elegant period detail. But Mad Men has set the bar so high for period, and I fear this one won't match it. They are shooting through a filter to effect a period look, and the stylization is forced. Lisa Bonet and Clarke Peters are in the first ten minutes but then when the main character is transported back to the 1970s they're left behind, big pity (ok, it seems Lisa Bonet will recur a la Richard Jenkins in Six Feet Under in ghostly form). The music in the pilot is pretty fantastic (Bowie, The Who, Rolling Stones) but who knows if they can afford to keep this up. Emblematic of a current trend: location shooting in NYC. Movies have been shooting in NYC for so long it's too familiar, and I'd be more excited to see location shooting in someplace we don't see so often, e.g., Milwaukee. And no, I didn't watch the British version.

M is for Mad Men, which retains its status as my favorite thing. So many astonishing scenes and episodes in season 2, clearly keeping up the high standard of season 1. The female characters are the show's strongest suit, but every aspect is top-notch, from the writing to the sets and costumes to the performances. Special props to the writers and actors for their handling of the closeted character, Sal, and for being so deliberately slow in unfolding the backstory of what happened between seasons 1 and 2.

P is for Project Runway, which like many of these competish shows, only gets good in the last few weeks when the contestants become characters. I'd like to see a reality show try to begin with a smaller cast and get rid of the convention of eliminating one contestant each week. My favorites of this bunch are Kenley and Leanne (who has an Etsy store you might check out). I appreciate this show for teaching me a lingo for talking about ladies' clothes.

R is for Rachel Maddow, the only talking head in prime-time I would seek out. What a fresh new face and voice! She smiles, she's smart and funny, she acts natural, she seems like people I know. For the first time since Aaron Brown left CNN I feel a connection to one of these bloviators (and yes, they are all bloviators).

T is for True Blood, the best new show I have seen in the past couple months. It suffers from the standard Alan Ball afflictions of inconsistent tone, cheesy subjective sequences, and overcooked thematics. I like melodrama, though, and I admire audacious gore. Anna Paquin is rare among the younger generation of actresses in conveying depths of feeling in her face. The storytelling is consistently gripping, especially the cliffhanger episode endings that pick up right away in the next week's installment. And I'm not fascinated by vampires but this show makes them pretty sexy.

and V is for Valentine, totally preposterous but a must-see at least once...I liked it better when it was called The Love Boat.
at 10/15/2008 1 comment: