One of my favorite shows right now is Damages, on FX. It's funny that I like it because I find the plot really hard to follow. Sometimes at the end of an episode I have no idea what happened. The characters' motivations are often obscure. Characters seem totally central to the season's narrative, like the one played by William Hurt earlier on this year, only to completely disappear for weeks at a time, suggesting that the story has gone in some other direction and making us wonder what their purpose was to the larger narrative. There are frequent flashforwards to tantalizing moments two or three months away in story time, but no clues about how present and future will connect up. This pistol will fire at some point, but that's about all we can be sure of right now. 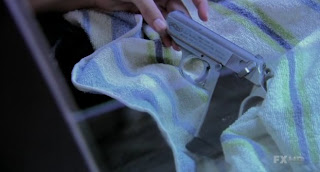 The writers like to feint and tease. For instance, we were led to believe that these FBI agents might not really be cops at all, but then they revealed that really they are FBI after all. And yet something still seems not quite right. 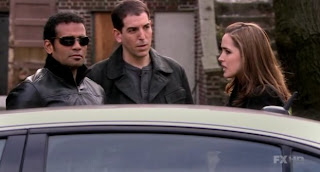 I love the actors, especially the ones playing lawyers and corporate types with their restrained performances and classy, professional attire. Like I said, I have trouble keeping straight what all these folks are up to, but they're still fascinating to watch. This gives the show a surrealistic appeal, like a cut-up, a bunch of scenes from a show that does make sense with some of the meaningful parts redacted. I enjoy the dramatic moments as dramatic moments without having a clear sense of what exactly makes them dramatic. For instance, Ted Danson as a white-haired scoundrel trying to mend his ways, adopting an Eastern spiritual path but still having trouble managing his anger. That's just awesome. 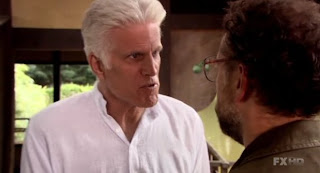 Tate Donovan, Jimmy Cooper from The O.C., plays a lawyer who dresses really sharp. He almost makes me want to go to law school so that one day I might wear suits like his. 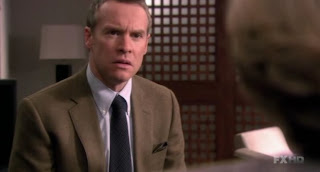 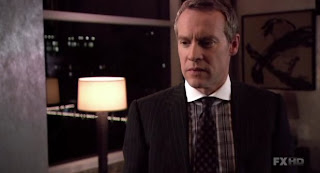 The main character, Ellen, played by Rose Byrne, is a sort of empty vessel. She has suffered a lot, and harbors deep grudges, but she has few scenes where she expresses strong feelings because her subordinate and investigative roles require that she keep things inside. The actress is good at giving meaningfully neutral looks that express depths of emotion. 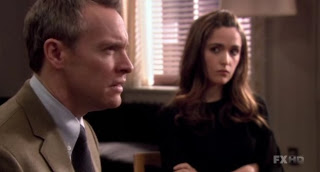 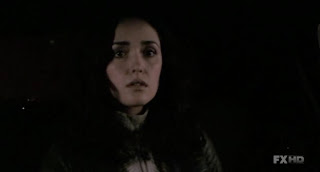 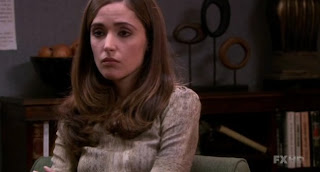 Two actors from The Wire, Clark Peters and John Doman, play energy company no-goodniks. It's very strange that these two are in cahoots on this show. Knowing them so well from that other show makes me invest less of my emotion in the narrative. But I appreciate them so much as actors. 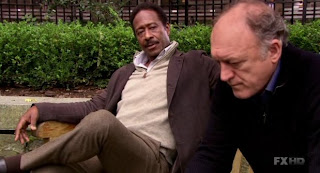 Glenn Close is a powerhouse. She looks out over those glasses an awful lot, always oozing intelligence and calculating judgment. Patty Hewes scares the pants off of me. 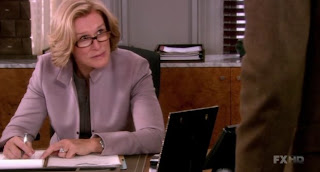 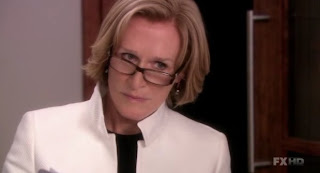 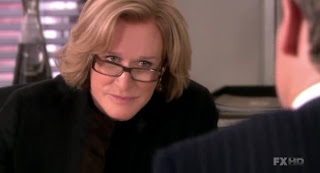 Every once in awhile Close shows us an intense, almost horrified face. You can sense her eyes starting to water up as she is seized with despair. Which we fear might drive her to God knows what acts of rank inhumanity. 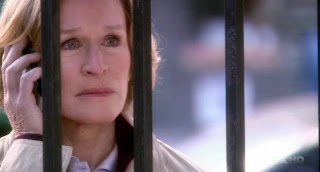 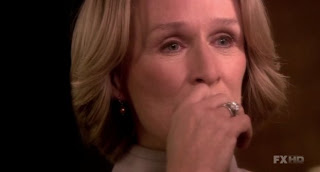 The most fearsome villain is this dirty cop with ginormous glasses played by David Costabile, another veteran of The Wire (also a goofy T-Mobile commercial). The specs and beard make the performance. In this scene he tells Wes, who under false pretenses has wormed his way into our heroine Ellen's life, earning her trust and going to bed with her, that his next task is to take her out. He's not talking about a date. 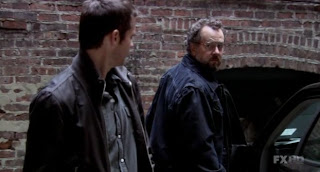 Did you watch season 1? Much better, in large part due to Zelko Ivanic's performance (and a scene of Ted Danson snorting coke and partying with a hooker that completely scarred Cheers reruns for me!). I gave up after 2 eps of season 2, as it just seemed to be spinning wheels.

I liked Season 1 a lot, though in the middle I recall the plotting getting slack. Season 2 isn't as gripping and no one actor stands out like Zeljko but there have been lots of good moments and the ensemble is strong.

Really the stories of season 1's episodes are very different from season 2 episodes, but season 2 is very interesting and i have downloaded many Damages episodes.