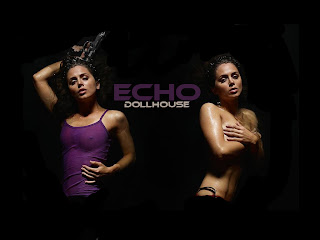 Fox hopes the lad mag demo will put down the PS3 and pick up the TV remote Friday nights for Dollhouse starring Eliza Dushku armed and/or naked.

Of the TV shows that have begun since the season's debut in September, I am most excited about Dollhouse. I haven't read that many reviews for fear of excessive spoilage, but I'm puzzled by the general lack of buzz. (The one positive one I read was Troy Patterson's in Slate.)

I've only seen the first two episodes (pro critics got access to three or more), but they have established a fascinating narrative premise with lots of promising opportunities for development and payoff, not to mention eye candy of the usual televisual varieties; a number of vivid characters, with slowly unfolding backstories and plenty of mystery; and a distinctive visual style, contrasting the stylized interiors of the dollhouse with its saturated colors with a more naturalistic and conventional approach for exteriors where Echo's missions are set. Eliza Dushku doesn't have great range as an actress (that I have seen). She does sexy, ass-kicking, and vulnerable. She can do smart, though it's not her biggest strength. But like Sarah Michelle Gellar in Buffy, she combines power and femininity in a way that invites admiration and even awe.

One thing Dollhouse lacks is Joss Whedon's characteristic comic sensibility. No one will write about book about Dollhouse's use of language (see Slayer Slang, which I highly recommend) or come out with a volume of quotations from the show (like The Quotable Slayer). Joss is risking a lot adopting this different, more straightforwardly dramatic tone. It's a bit audacious. Maybe part of this shift is a function of commercial constraint: to have a show like this make it on Fox, it might have to appeal more widely than any show did on on a 1990s netlet. Good for him if he can make it work.

All of these images are from episode 2, "The Target." 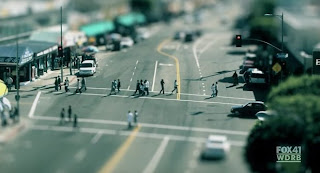 This groovy tilt-shift shot from the title sequence offers a view of human beings as miniatures. There's no context for this shot, so it seems to be going for symbolism. All of these strangers off in the distance are leading their ordinary lives not knowing that some of us are like Echo, a slate wiped clean and then imprinted, by a geeky Frankenstein, with customized personality. 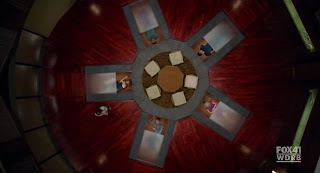 Where the dolls sleep. Grand overhead angle, with its geometric abstraction, to emphasize the interchangeability of persons and the machine-like efficiency with which human beings are routinely transformed. Busby Berkeley gone sci-fi and post-human. 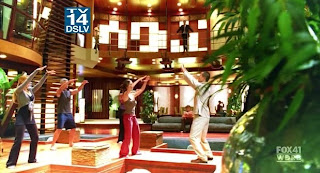 Yoga keeps dolls in shape. The second story offers a view for the staff to keep an eye on their charges. Lots of bright, warm colors in here. It looks a bit unreal, and uncomfortably comfortable. 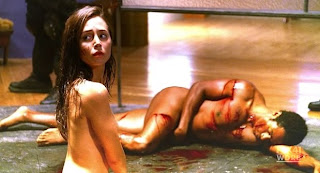 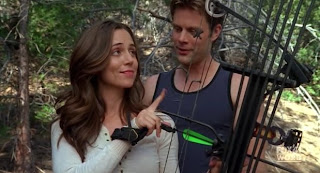 Soon this weapon will be turned on her but for now she's in charge. 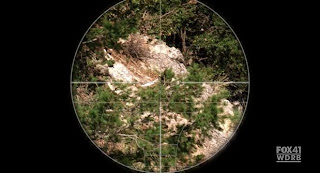 That's our heroine in the crosshairs. The most interesting thing about the show thematically is that it presents a woman as object in many senses, and then starts to complicate things. We know enough about Joss to trust that there will be a feminist undercurrent. But unlike Buffy, Echo has no special powers, so presumably we will fear for her more, and it will be more of a challenge to have her assert her agency. 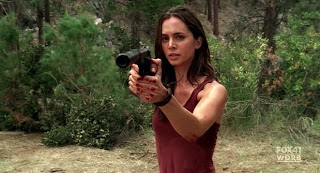 A girl and a gun. You knew the long sleeves would have to come off. 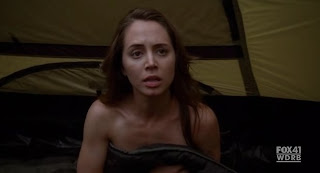 Joss does better act-outs than anyone. This one at the close of Act I is a jaw-dropper, as we realize along with Echo what's at stake in this episode: she is to be hunted. 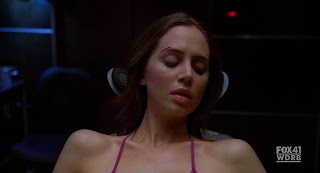 You see Echo's shoulders as often as possible in Dollhouse. This frighteningly thin physique is your basic hot chick look in American pop culture today. In Echo it might work to convey her vulnerability, but mostly it just makes me think the actress needs a sandwich. 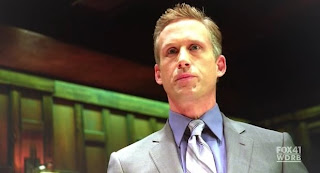 Reed Diamond will forever be Kellerman from Homicide to me. He plays good nasty. His close-set eyes are always up to something. 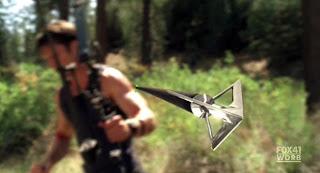 An airborne arrow is a nice bit of over-the-top action. Dollhouse is Genre to the core. 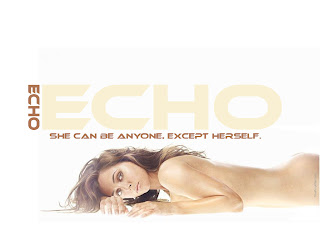 Wallpaper courtesy of the Dollhouse on Fox site (which might just as well be called Fox on Dollhouse).
at 2/23/2009