Turning creative success into business is your work! 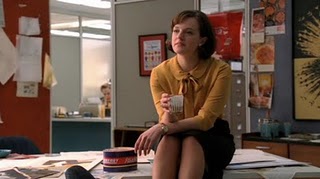 Quality TV performs its own quality, and Mad Men does this as much as any upscale program. It is constantly, flauntingly reaffirming its own value in so many ways: by dramatizing creative struggles against commercialism; by making itself into an audiovisual history museum; by beaming progressive, liberal ideals through the contrasts it loves to draw between then and now; by investing every detail with thematic meaning, from dialogue to chairs to hairstyles and cocktails (not by accident or genre convention does our anti-hero drink Old Fashioneds). It does so in the by now traditional modernist fashion, being deftly metatextual and intertextual. Quality TV performs its own quality to reassure us that, despite our many and various misgivings about television, we who appreciate it are doing something more than watching soap opera. But what makes so much Quality TV enjoyable is precisely its appeal AS soap opera, the continuing stories of characters we get to know over time, episode by episode and season by season, their larger-than-life conflicts, their fears and dreams, their neverending cycles of relationships and breakups and makeups. Mad Men is about secret identities and hidden pregnancies, rape and infidelity, schemes and counter-schemes. It is about primitive office politics and the fetid suburban reality of self-loathing. We watch to find out what will happen next and how. We watch as communal social practice and ritual, and to have something to talk about when we’re not busy watching. Somehow the geniuses who make this show have sold the boutique cable audience on the fantasy that all of the soap opera we love is legitimated by Quality and its trappings.

Advertising in Mad Men is, among other things, a metaphor for television. Is it Art like the opera in which Bethany Van Nuys is a supernumerary, like the Rothko on Bert Cooper’s office wall, like Frank O’Hara’s Meditations on an Emergency that Dick Whitman mails to Anna Draper? Or is it just a way of selling housewives canned hams and floor cleaners? And can it be both? Keep in mind, last night’s Mad Men was chock full of branded props, like Don’s Canadian Club. 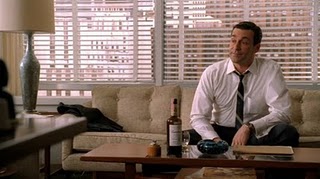 On a second-season commentary, Matt Weiner says he sees himself in both Don and Peggy, mentor and protegee. He identifies with their struggles to produce good work in the face of demanding clients and bosses. There is always the tension between art and commerce in television and advertising, and the authentic is ever the artistic rather than commercial value of “creative” work (remember Don is “head of creative”). Run-of-the-mill TV need not advertise its creative ambitions, but to rise above the status of guilty pleasure, the Mad Men type shows need protection against the inauthenticity of commercialism.

Thus the very contemporary ambition Don voices to make his Glo-Coat spot “indistinguishable from the movies” as a way of holding the audience’s attention and make them forget they are the victims of a pitch. Here we have the cinematization of television so prevalent in contemporary discourses projected backwards thirtyforty-five years. 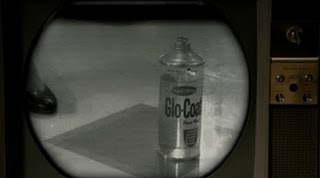 “Public Relations” also dramatizes the tension between devotion to work and to selling the work, and in order to do so effectively, also the selling of the self as personal brand. Don Draper was taught not to talk about himself but that’s not good public relations. He wants his work to speak for itself. Hard not to see this as the TV creator’s resistance to promotional press, to interviewers asking him to explain himself. Don Draper can always be read as a stand-in for something or someone, and certainly as an ideal of spontaneous creative genius, the kind that cannot be taught. But his successes are only realized when the products he is selling really sell; genius is not its own reward. When he complains about having to do PR for himself and his firm, insisting that his work speaks for him, Bert Cooper, ever the canny businessman, retorts, “Turning creative success into business is your work!” No truer motto will ever be coined for the TV creator.

After a long time away we are dying to know what has happened and how. Season Four begins by announcing its theme in bold, italics, and underline: Who is Don Draper? The show often comments on its own meanings in this way, as season two begins “Let’s twist again like we did last summer,” referring at once to the dancing in season one and to AMC’s scheduling. Who is Don Draper? is not just the new season’s theme -- it is the whole series’, and by now we know a fair bit of the answer. But as a theme for the season this looks a little weak. I would rather, Who is Peggy Olson? More is new about Peggy than her hair. She bosses this new male creative guy Joey around (“I need it in an hour, chop chop Joey”) and drinks neat Jameson whiskey. She has become considerably more assertive and confident, and seems to have a steady boyfriend. Mad Men has always let its female characters fascinate us more than its eponymous males, and this is itself thematically significant considering its style of subtle feminism -- while seeming to be about men, it’s really about gender and its recent American history. I’m more eager to fill in Peggy’s story in the time that has passed between seasons than any other character’s. 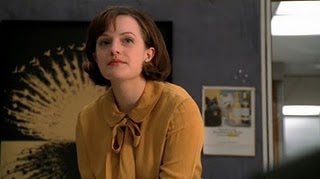 So many questions are in my mind as I think about the episodes to come. Who will Don sleep with this season? Will things go as badly for Betty and Henry as this episode suggests? Does Kiernan Shipka’s addition to the main credits mean, as we must hope, that Sally Draper will become even more significant? Will we be seeing Paul Kinsey, Ken Cosgrove, Sal Romano, and other departed Sterling Coo characters again? Will the men stop wearing hats? And what new (or old) ways will the show find to legitimize itself?
at 7/26/2010

Excellent thoughts about Peggy. For those of us who watched our parents' arguments, fights, and separation (while living in the same house), Betty Draper may be headed down a slippery slope.

And you mention hats-- yes, I imagine someone will rebel at the thought of wearing a hat. Ever notice that Don really doesn't know how to wear one?

My father ran Cavanagh Hats-- one of the major hat manufacturers of the time-- and I can't begin to tell you the impact that the erosion of the hat business had on our lives.

Needless to say, my father was no Kennedy or Beatles fan.