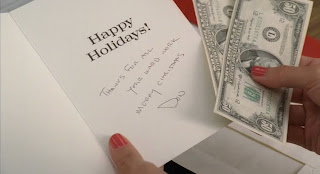 Prostitution is a recurring presence in Mad Men, both as representation and metaphor. In the very first episode, “Smoke Gets In Your Eyes,” Peggy offers herself to Don by placing her hand on his only to be brusquely cast aside with the line, “I’m not your boyfriend.” 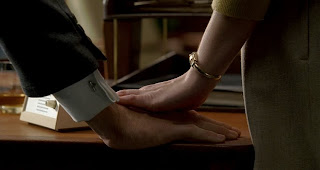 Is part of her paying job to be sexually available? Maybe, but Don’s not interested. It could be because she dresses too modestly for Manhattan in 1959 and seems unsure of herself -- the opposite of the office sexpot, Joan. Now in “Christmas Comes But Once A Year” with Don several secretaries past Peggy at Christmastime 1964, Allison returns Don’s lost keys and must be sexually available to him. Her recompense is a $100 Christmas bonus. He might have given her as much otherwise, we’ll never know. But the unavoidable suggestion is that she is being paid for a service more intimate than typing letters and buying birthday gifts for Sally, Bobby, and baby Gene. We know by her facial expressions when called into his office on the morning after that she is falling for Don (or has fallen for him already) and feels like his lover rather than his whore, which debases them both when it becomes clear that he intends to treat their encounter like his pre-Korea identity and Peggy’s baby -- as something that didn’t happen. (We have prostitution in mind already this season from the previous episode, in which Don sleeps with a whore who knows what he likes -- being slapped around in bed.) 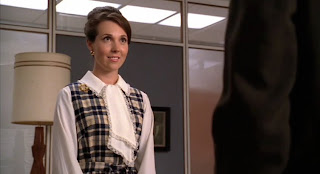 Quality TV like Mad Men rewards the attention of the most serious, committed viewer who watches from the beginning and in order, who never misses an episode, who remembers and appreciates details. This is TV in its aestheticized mode encouraging attention to form and to thematic meaning, soliciting explication and interpretation (I am the victim of this appeal as much as anyone). “Christmas Comes...” works ok as a standalone episode but this kind of show has no standalone episodes. We are especially gratified by the prostitution theme considering our previous encounters with Lee Garner, Jr., the Lucky Strike heir who in the previous season ruined the career of the closeted gay illustrator, Sal, by demanding that Sal be fired after refusing a sexual advance. 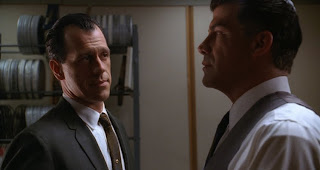 In this new episode Garner again demands quid pro quo. Not only must the ad firm throw a Christmas party at which he is given the only significant gift, but Roger Sterling must don the Santa suit and pose for ridiculous photos with the SCDP men posing on his red velvet lap. 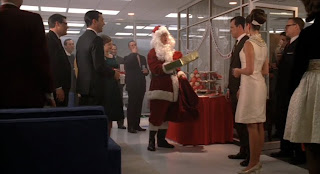 There is one more moment of quid pro quo involving sex and power in this episode, but by contrast to these more despicable representations, the story of Peggy’s relationship with Mark is more gentle and affectionate, though I foresee bad times ahead for these two. Peggy says in season one that she tries always to be honest, but she has let her boyfriend think she is a virgin and of course she is hardly that. The previously before this episode reminds us that she slept with Duck Phillips in season 3, and we committed viewers know of other lovers including Pete Campbell. Every sexual situation involving Peggy reminds us that she got pregnant at the beginning of the series and gave away her baby. Now Mark is trying to pressure her to giver herself to him, and in a humorous bit of dialogue he says, “I brought you cookies!” He doesn’t really mean that she should have sex in exchange for cookies, but as ever there are resonances from elsewhere that amplify the meaning of what might have been a throwaway line. 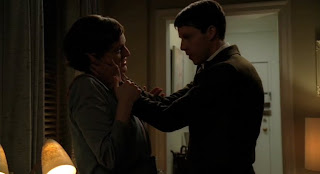 Earlier in the episode the market research people Bert Cooper brings in offer the SCDP folks cookies in exchange for taking a test they administer to collect data about consumers, which Don refuses to take (because it reminds him of his awful childhood and diasterous domestic situation). Later Faye, the self-assured blonde who runs the testing, explains her methods to Don and seems to have him totally figured out, which troubles him. She even infers that his cinematic Glo-Coat ad of the previous episode was a product of his childhood! Along with his neighbor Phoebe, a nurse at St. Vincent’s, Faye seems like a potential new romantic partner for Don (maybe she still is), so it surprises us at the end of the episode when he winds up with his secretary. But of course of all of these women, she is the one over whom Don holds power.

The thematic parallelism of Don’s fling with Allison and SCDP’s submissive deference to Lucky Strike, as well as the bits with the cookies, brings home a meaning familiar from earlier seasons and episodes: that business and personal affairs alike are structured around unequal relations of power. Capitalism and Patriarchy both demand supplication to authority and money. They thrive on inequality. The story of the 60s which Mad Men is so methodically telling is a story of progress toward equality in some spheres. But it’s also a story of our own times, in which consumer capitalism has grown only more rampant, and in which “post-feminism” has obscured many of the persistent and insidious inequalities between and among genders. Prostitution is a metaphor for unequal power relations, for the degradation of the weak by the powerful.

It is also a potent metaphor for the creative process, and in a commercial medium like television as in advertising, the authentic talent of artistic workers is often represented being under threat from the power of capital to pervert and exploit. The creative person whores their talent. Art like love ought to be a gift, but a both are often given with expectations of something else in return. In feminist analyses, heterosexual relations and in particular marriage are sometimes seen as variations on prostitution. Betty is often portrayed as a victim of such unequal relations between married persons before she and Don split up, and in season 2 she flirts with selling her body to the auto mechanic who stops to help her (this is a way of getting back at Don for his affair with Bobbie Barrett). Joan is likewise represented as selling herself to her husband, Greg, who asserts his ownership of her body in the season 2 scene in which he rapes her on the floor of Don’s office. The overarching metaphor of advertising as a big lie, an illusion of authentic reality, also feeds into the recurring prostitution theme. The work Don and Peggy and Sal and the others do, work that has real meaning and comes from a place of real personal inspiration, is sold to the corporations who exploit it for their profit. As I argued last week, this functions not just as a critique of advertising or capitalism, but as a metatextual commentary on the status of the television creator. Being beholden to a powerful master cuts across all the levels of meaning.

Peggy does sleep with Mark, but the truth about her virginity is still her secret. Don is an asshole to Allison but we'll see where things go with her. Faye and Phoebe still seem like potential romantic partners, and I doubt we have seen the last of Bethany. And the prostitution theme will undoubtedly persist. At this point, a fourth season of a show that promises to go on several more (I will be disappointed if it ends before 1969), much of the pleasure of Mad Men comes from the repetition with variation, the situations and ideas that come up again and again but tweaked each time to reveal a different shade of meaning or a new twist on a familiar character. I watched some of "Smoke Gets In Your Eyes" earlier to make the framegrab above and was astounded by how much the characters have changed, especially Pete and Peggy, despite the fact that the show continues to tell much the same story.
at 8/02/2010

Yo. I'm watching the shows on slight lag, so I haven't yet seen this week, or read your post.

Here's what, though: When Don pays Al the bonus he's trying to deliberately shame her. It's not just part of the larger sexism-in-the-sixties culture, as established by the show, it's out of step, excessive . . .

Don and Allison could have developed an awkward relationship of indeterminate length - like Joan and Jane and Sterling, Crane and Hildy, even Pete and Peggy. Without Don handing over cash and making their inequality, and, as you say, the role of their relationship within capitalism and patriarchy, so darn obvious.

I think everything you've said about the prostitution trope is right on. I just want to add a bit more fat to the fire: Freddy, Joey (possibly the first conventionally good looking man on the show) and the dark and mysterious Glenn are all important parts of the amazing Allison-Don interaction.

Don's bitter right now towards women and towards the way that they (well, Betty) negotiate this world. He's suddenly feeling his own powerlessness, and he deliberately shames Allison as a kind of revenge. I think it's also part of why he acts out, like a precocious adolescent kid (Glenn), with the swimsuit people.

Don, though, in reinforcing this particular relationship of sex and power, is wallowing in the Mad Men of seasons past - what year is it? How many years has it been? He's "pathetic" as Joey (whose opening lines mock an old married couple) says. He's not quite grande-dames-and-spinsters-and-portable-typewriters Freddy, but why is Freddy even there? To provide an even more exaggerated model of out-of-date (even for then) masculinity for us to measure Don against.

I also think the new offices (and lack of conference table) play to this theme of Don as a sexual fish-out-of-water right now.

But is Don's dated sexuality sustainable? Will it alter? Will it be ignored? (I feel like MM sometimes raises this stuff and then drops it, but that's another issue . . . )

And does any of this explain Peggy's terrible old lady make-up? No, it does not.