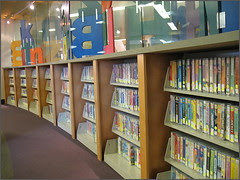 I thought we were through with tape, but not so fast. We share our home entertainment with a 3 year-old named Leo, and Leo's favorite thing these days is to walk to the public library down the street to borrow video cassettes of his shows (these days, Teletubbies and Thomas and Friends are the ones he gets out of the library, though Disney's Little Einsteins--too new to be available on tape at all as far as I can tell--is his hottest passion at the moment). At first when he discovered the public library's collection of his shows he was ecstatic and I was dejected. Not tape! I said goodbye to all that! But it quickly became apparent that VHS tapes of children's shows have several advantages over DVDs. They lend for a week whereas DVDs only go out for three days. They're more suitable for a young child to handle. I don't want him putting his fingers on discs, but he's actually good at jockeying tapes. They play automatically when inserted and he knows how to use the stop/eject button. By comparison, he's not yet sophisticated enough to control the DVD player, to know the menu button and the magical means of skipping boring previews.

And to be honest, I kind of like tapes. They make me nostalgic for the old days. And having to rewind them before we take them back to the library makes me feel like I'm doing a good deed.

Anyhow the point of this is: reports of the format's death are exaggerated.
at 3/23/2007

Glad you and Leo like the tapes. We have found that older people often prefer audiotapes over compacts discs for similar reasons.
Beth
Director Shorewood Libray

Thanks for the comment, Beth. We love the library.