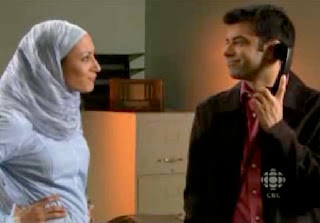 The first episode of the CBC sit-com Little Mosque on the Prairie (previously) is online. It has the same earnest, multi-culti sensibility that makes Degrassi seem so endearingly Canadian. And it's the only contemporary instance of North American pop culture I can think of that makes a Muslim woman in a headscarf and long sleeves seem sexually alluring. This pilot episode is full of double-entendre terrorism jokes and there's no way they can keep up that kind of humor, but the writing and acting are both competent and there's a sizable audience watching, so the show should be given a chance to find its groove. I hope to see more.

A review in the Vancouver Courier makes the point that the non-Muslim characters are hardly recognizable as small-town Canadian prairie folk--they come off as rubes. Well, rubes hardly bother me in a sit-com. Actually, the realism issue that I found confusing is that the Muslims in the show come in too many ethnicities. Some are white, one is black, and others are shades of brown. Some seem Middle Eastern, others South Asian. One central role is played by Carlo Rota, the same Canadian-English-Italian actor who is Chloe's BF in the current season of 24, fighting Muslims in one show while playing a Muslim in another. Of course Muslims do come in many ethnicities, and this is a good point for the show to represent, but it seems preposterous that one small community of Muslims in Saskatchewan would be so diverse. Some socially progressive representations (including Degrassi) sacrifice certain kinds of realism in order to promote a positive message.

(For more detailed thoughts about the first two episodes' writing and execution see Dead Things on Sticks, a blog by a Canadian TV writer.)
at 1/28/2007

I love this show.

White people living in Saskatchewan are SO STUPID!

I love watching them made fun of.

"Little Mosque" depends of offensive stereotypes for its humour.

Also, while at times funny, I do wonder about how "real" the situation is. I once saw a show about how the Nazis made two propaganda films about the conflict between the British and the Irish. The films, at least according to those who were interviewed who had seen them were quite good. The only problem was that the people in the movies were not Irish. What I mean by that was that the culture of the Irish portrayed in the films in no way reflected actual Irish culture as I guess the Germans who wrote, produced, and acted in the movies never took the time to get to understand the traditions and feel of the Irish people. It just wasn't important to them because in the end it had nothing to do with the Irish. It was as one commentator of the movies said "Germans talking to Germans".

And that is kind of what I am getting with the "Little Mosque" show. In the end it isn't really about small town Saskatchewan or Muslim communities living within small town Saskatchewan. In the end what it comes down to is just Liberal Urbanite Canadians talking to Liberal Urbanite Canadians, with their political message being far more important to them than whether or not the situation portrayed reflects a real situation in the country accurately enough.

By the way, why does "The She Mayor" remind me so much of the mayor on South Park?

(Reply to this) (Thread)